Gregory Mark, Founder and CEO As much as it is about the epic showdown between armored robots, the popular television show BattleBots is also an excellent platform for showcasing innovative engineering and design. In May 2019, the show premiered its ninth season on the Discovery Channel, and fans of the sport immediately noticed a significant enhancement in the bot design and maintenance capabilities of the competing teams. Behind this improved battle bot manufacture and repair is a Massachusetts-based innovative metal and carbon fiber 3D printer provider, Markforged. Greg Munson, president, co-creator, executive producer of BattleBots Inc., says, “Teams with broken bots were saved and returned to the fight because of Markforged and their fantastic 3D printers.” The company’s 3D printers helped 29 teams manufacture parts such as custom shock mounts, and other support components, which decreased the fail rate of the mechanical contenders. At the same time, parts produced with Markforged printers aided contestants to comply with the tournament’s strict robot weight limits by enabling the creation of tough custom parts with superior strength-to-weight ratios.

Today, apart from revolutionizing the design and maintenance of robots on television, Markforged cutting edge 3D printers are also used in the automotive, oil and gas, aerospace, and other industries. The company’s diverse clientele is best showcased on the Markforged YouTube channel, where professionals from disparate backgrounds like F1 racing and biomedical sciences elaborate on how Markforged printers are revolutionizing the production of industry-specific components.

Over the last century, attempts to drive innovation for manufacturers brought forth a wave of additive manufacturing. However, due to the additional costs, time-consuming assembly processes, and fragile or short-lived end products, the initial promise of adding supplementary parts in an attempt to rekindle the stagnated manufacturing innovation fell short. This shortcoming combined with founder and CEO of Markforged, Gregory Mark’s belief that ‘there is always a better way to make things’ led to the inception of Markforged in 2013.

“3D printing cuts down the time between design and manufacturing from six weeks to a day, thus empowering engineers to build products with unmatched design accuracy,” says Mark. And with the reliability offered by Markforged printers, technology innovators can find newer ways to incorporate groundbreaking design aspects into their products and reinvent the overall manufacturing process.

With our 3D printers, we enable innovators to run rampant with their imagination and change the world in a simple and cost-effective manner

Unlike traditional metal 3D printers, Markforged’s metal printing system utilizes metal 3D filaments that combine the simplicity and safety of fused filament fabrication (FFF) printing with the superior properties of advanced metals such as 17-4 PH stainless steel and H13 tool steel. In the near future, the company is set to launch the 3D printing of even more robust metals like 316L stainless steel, A2 tool steel, Inconel 625, and Titanium 6-4.

On the other hand, Markforged has developed an easy to print and highly rigid nylon-based printing material, Onyx, which is at the heart of all Markforged composite parts. When used in conjunction with the company’s carbon fibers, Onyx lends superior strength at a fraction of the weight. In the three-point flexural test, the reinforcing carbon fibers display a flexural strength higher than the ABS polymer and aluminum.

In one instance, owing to the unparalleled strength-to-weight-ratio of Markforged’s printing material, Haddington Dynamics, the Nevada-based developer of DEXTER HD, switched from using weak PLA material to reinforced Onyx to produce their 7-axis fully assembled robotic arm. In an interview, Kent Gilson, the inventor of DEXTER HD says, “Within about three weeks of receiving our printers, we had completely redesigned the robot with the carbon fiber layup and saved all kinds of volume.”

Markforged also provides composite 3D printing products via its industrial and desktop series of printers. Under its industrial series, the company offers three industrial-grade large-format printers, namely the X3, X5, and X7, which deliver unparalleled accuracy, reliability, and repeatability in manufacturing tooling processes.
And the company’s desktop series comprises the Onyx One, Onyx Pro, and the Mark Two.

The Markforged X3 is a plastic 3D printer that produces tooling and functional parts that are 20 percent stronger and 40 percent stiffer than ABS by using chopped carbon fiber filament reinforcement. The product boasts motor encoders and a laser micrometer 3D scanner to deliver exceptionally accurate and inexpensive component manufacturing for a wide array of industrial applications. Markforged also offers X7, which creates work-ready parts with Onyx reinforced with carbon fiber filament, fiberglass, or Kevlar in a day. At the same time, the X5 3D prints fiberglass parts for load-bearing applications quickly and cost-effectively, thereby allowing manufacturers to replace mission-critical machined aluminum with 3D printed composite parts at five percent of the original cost.

In the desktop series, Onyx One prints stiff and dimensionally stable engineering grade parts that have twice the strength of any other 3D printed plastics. And by combining Onyx with fiberglass, the Onyx Pro assists manufacturers to swap expensive mission-critical machined metal with its printed counterparts at a low-cost. Lastly, the Mark Two 3D printer unifies Markforged’s continuous fiber reinforcement with workhorse reliability to deliver the most durable and most versatile parts, which can be designed and sliced using the company’s user-friendly and powerful Eiger software.

In the fourth quarter of 2019, Markforged is planning to launch its groundbreaking product, Blacksmith, an AI solution that connects production machines and inspection equipment to automatically adjust programming and ensure that every part is produced as designed. Blacksmith analyzes a design, compares it to the scanned part and adapts the end-to-end process to produce the in-spec components. Concurrently, the solution learns and adjusts to the variations in the process over the lifetime of a machine, and creates a continuous feedback loop to make parts more accurate. Markforged’s AI solution gets smarter with every scanned part to imbue further efficiency into the manufacturing processes, accelerate time to market, and reduce the cost of production. With Blacksmith, Markforged aims to revolutionize the newest technologies for metal 3D printing by eliminating the part distortions caused by sintering to deliver precise parts.

Changing the Pace of Human Innovation

Since its inception, Markforged has gathered a passionate workforce of over 300 employees, including engineers, scientists, problem-solvers, and creators hailing from all around the world. The company has raised a total capital of $137 million following a Series D round of $82 million led by Summit Partners. Other achievements include Markforged’s Metal X being named a finalist for the robotics and hardware category at the 2019 SXSW Interactive Innovation Award.

Today, with over 10,000 customers around the world and the experience of printing 1.6 million parts, Markforged envisions to increase manufacturing system efficiency through better and faster ways of making functional prototypes and end-use parts. “With our 3D printers, we enable innovators to run rampant with their imagination and change the world in a simple and cost-effective manner,” concludes Mark.
- Kenneth Thomas
October 31, 2019 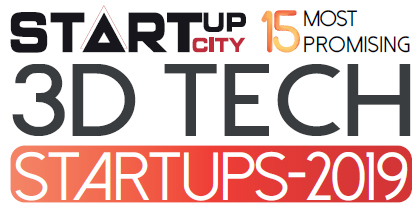 Description
Markforged was founded on the belief that there is a better way to make things. The company is transforming manufacturing by addressing 3D printing as a holistic problem. Markforged is a manufacturer of industrial 3D printers, print systems, and software, as well as an innovator in the technologies and materials that continue to define this emerging industry. Their innovations involve a combined effort in advanced cloud computing, cutting-edge materials science, and industrial design. The company looks forward to increasing manufacturing system efficiency through better and faster ways of making functional prototypes, tools and fixtures, and end-use parts—at scale 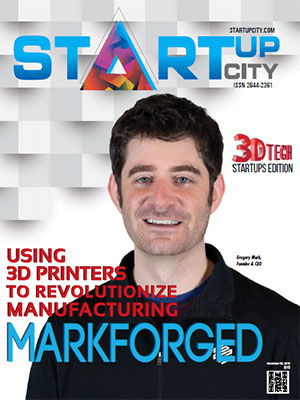